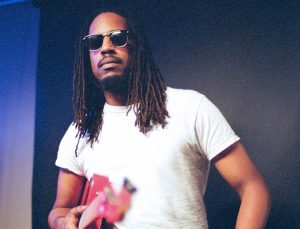 Black Joe Lewis & the Honeybears, will ignite the tent alongside blues guitarist, Cedric Burnside, for an evening of unmatched soul, loud passion, and energy on Sunday, October 2!

Black Joe Lewis & the Honeybears return from the pandemic with their most subversive record to date: an exploration of the sordid trappings of ego, isolation, consumption, waste, and war. Sonically inspired by the Hill Country blues, cowpunk, and the southern soul of Stax, this latest album charts new territory with a heavy stream of lyrical consciousness.

Cedric Burnside is one of the few purveyors of North Mississippi Hill Country blues, a loose, driving regional variation of the blues that was created by his grandfather R.L. Burnside, among others. It is distinct from its Delta or Texas counterparts in its commitment to polyrhythmic percussion and its refusal of familiar blues chord progressions. Often, and especially in Burnside’s care, it leads with extended riffs that become sentences or pleas or exclamations, rendering the guitar like its West African antecedent, the talking drum. Riffs disappear behind and become one with the singer’s voice, like the convergence of hill and horizon in the distance. Sometimes they become the only voice, saying what the singer cannot conjure the words for.