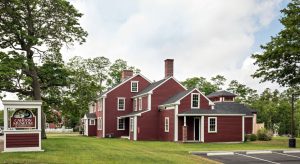 Mark Perry — Inspirations Past and Present

This exhibition features basswood carvings by sculptor Mark A. Perry (b. 1958) that reflect his passion for American folk art.

This exhibition features basswood carvings by sculptor Mark A. Perry (b. 1958) that reflect his passion for American folk art.  As an avid collector of folk art sculpture, Perry was initially inspired to begin carving in wood when he attempted to recreate a carved whale he had been outbid on at auction.  Later, he found a photograph of a 19th century scrimshaw pie crimper, in the form of a dog.  That image resonated deeply and became the inspiration for his many ‘crimper’ works; designs which incorporate a wheel carved in various exuberant forms.

Perry lived and worked on Nantucket for 20 years, during which time he unexpectedly transitioned from being the property manager of a large beach front estate to a full-time, self-taught carver.   The island’s rich history of whaling, and the folk art traditions that flourished there, made Nantucket the perfect breeding ground for his artistic passion.  To learn his trade, hone his skills, and better understand his medium, Perry began successfully recreating antique folk art masterpieces and, in doing so, developed the confidence and skills he would later apply to creating his own sophisticated folk art sculptures.  The works in this exhibition represent some of the highlights of Perry’s artistic career to date.

These unique artworks embody the emotional spirit of folk art, highlighting what he calls an “unexpected, simple, and perfect balance of surface and form.”  Perry hopes his heirloom sculptures will find a place of their own in our contemporary world and will continue to be appreciated for their timelessness, from one generation to the next.

Perry has exhibited at some of the most prestigious craft shows throughout the country, including the Smithsonian Craft Show in Washington, DC, the Philadelphia Museum of Art Craft Show and the Architectural Digest Show in New York City.  His work is included in private collections across the United States.

He currently lives and works in Westerly, Rhode Island.

*Learn more about NARM and other member benefits;

Library passes are good for 2 Adults, present pass when checking in.;

The Cahoon Museum is a Blue Star Museum from May 21 – September 5, 2022. Free admission to military personnel and their families.

The Cahoon Museum has ample parking at the rear of the building.  Convenient handicapped parking is available.