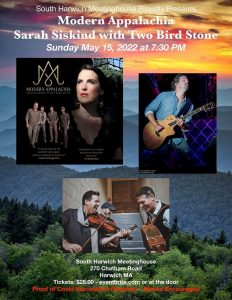 Using the name “Modern Appalachia” to frame the marriage of traditional and progressive takes on the sound of their region, their stories-in-song span the spectrum from heartfelt ballads to full on electric rock. Please join us in welcoming them in the warmth and intimacy of the Cape's ideal music venue, our beautifully restored 1836 South Harwich Meetinghouse, proud recipient of the 2019 Massachusetts Historic Commission Preservation Award.  The South Harwich Meetinghouse recreates the perfect setting with historic lighting, unparalleled acoustics and candlelit ambience.

“Siskind has been compared to Bonnie Raitt and Brandi Carlile, but in my humble opinion, she’s incomparable.”     -Huffington Post

With regard to Sarah Siskind’s Modern Appalachia album “This stunner of an album is heart-stoppingly great.”                      Mary Chapin Carpenter

When Liam Thomas Bailey, leader of Two Bird Stone, discovered Sarah’s music on NPR, he reached out to her in hopes that she would participate on his upcoming album. Siskind loved what she heard; the two had instant musical chemistry in the studio and soon realized their influences were parallel, particularly in the trinity of old-time/traditional, Celtic, and progression fusion.  Such an uncommon combination solidified their musical friendship. These recordings led to Sarah’s contributing vocals on three songs on Two Bird Stone’s album “Hands and Knees”.  Through the pandemic, they stayed in touch as they both raised families in North Carolina; Sarah in the mountains of Brevard, and Liam in Hickory.  After repeated canceled tours for both, they had the opportunity to combine shows on a small 2021 tour in the NC mountains. On stage, Sarah and Two Bird Stone organically fell into magical collaboration, lending harmonies and soaring guitar to each other's songs.  They knew they must do more of these collaborations and so ‘Modern Appalachia: Sarah Siskind with Two Bird Stone’ was born. They plan to tour throughout 2022.

Outside of this project, Sarah continues to write for Film/TV and other artists (Nashville, Station 19 , The Wire, Alison Krauss, Wynonna Judd and more) while she is also preparing for her next solo album. The pandemic provided her time to launch a long-time dream of starting a creative arts center in Brevard where she currently offers workshops and private Creative Coaching, called Carolina Creative Arts.  Liam, a graduate of Berklee School of Music, is also a private music and songwriting instructor and supports artists on tour such as Brett Eldridge and Rodney Atkins. Two Bird Stone continues to work on new material for their future recording.

Tickets are $25 General Admission - available on evenbrite.com, and also at the door.